EXPLORE THE WORLD OF THE VAMPIRATES 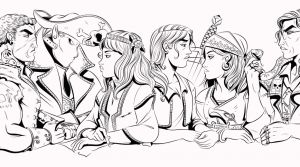 I think that one of the things I enjoy most about Vampirates – and hopefully readers do too – is the cast of characters. I know from letters, e-mails and visits to schools, libraries and literary festivals that everyone has their own favourite.

There are so many characters in the books that I now keep a handy WHO’S WHO by my side to ensure I keep track of them all – in some books, there are over 60 named characters! So let me introduce you to SOME OF THE KEY CHARACTERS in the story and give you the lowdown on each . . .

There is not much time. It will be dark soon and the Feast will begin.” Vampirate Captain – The Nocturne 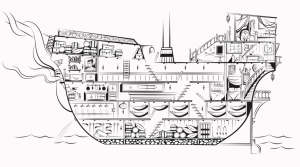 Ships are integral to the world of Vampirates. Visually, so far, they all hark back to the era of the tall ships from the original golden age of piracy in the eighteenth century. However, on closer inspection, each ship is somewhat different and expresses the unique character of its captain and crew.

COME WITH ME ON A VOYAGE on some of my favourite ships that sail in the world of the Vampirates, including The Nocturne – the most mysterious of ships with a blood-red deck and strange, tattered sails; The Diablo (meaning “The Devil” in Spanish) – one of the most notorious pirate ships ever to roam the high seas; and The Blood Captain – a former prison hulk that’s been taken over by a new, powerful and utterly ruthless crew of Vampirates . . .