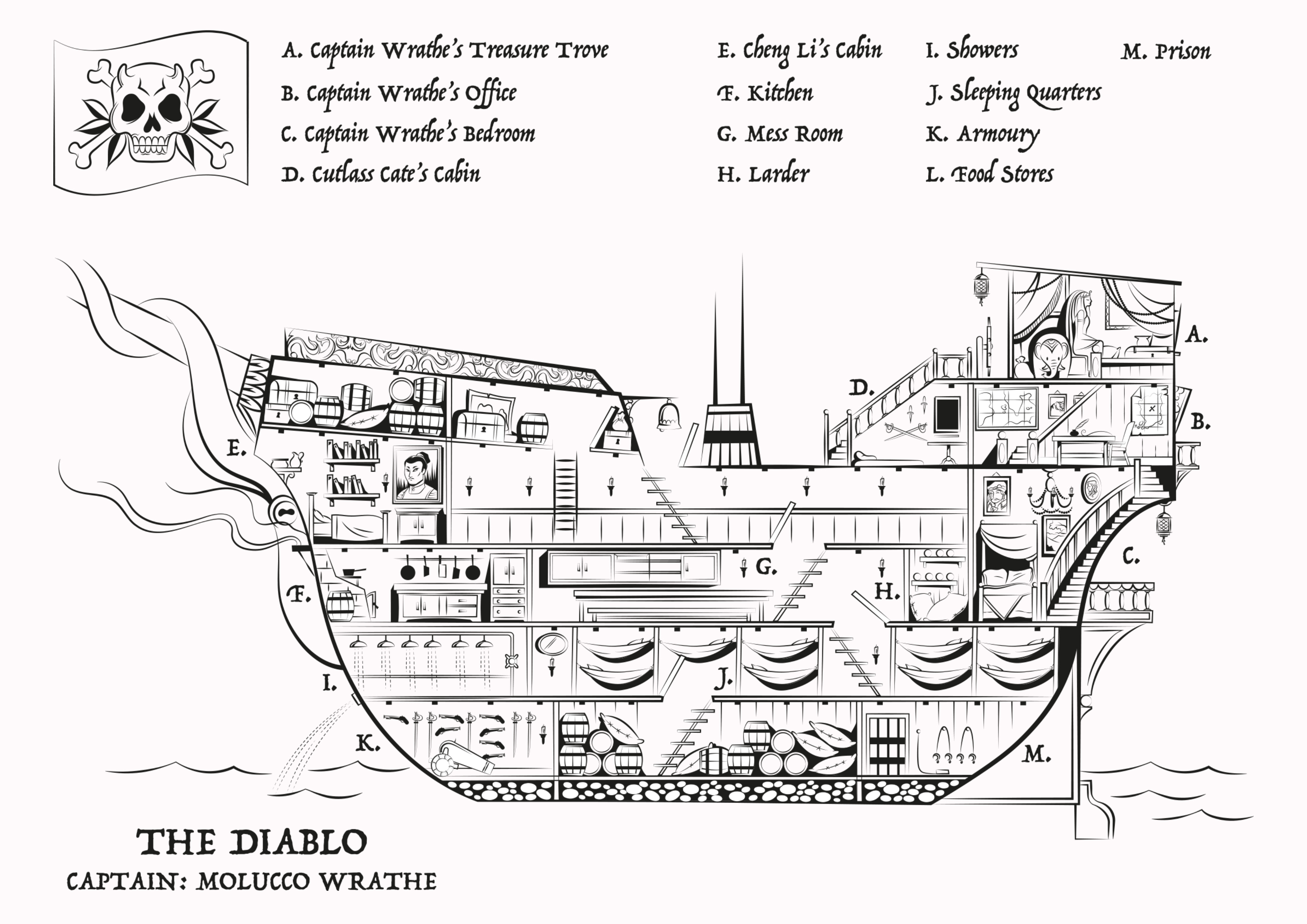 Ships are integral to the world of Vampirates. Visually, so far, they all hark back to the era of the tall ships from the original golden age of piracy in the eighteenth century. However, on closer inspection, each ship is somewhat different and expresses the unique character of its captain and crew.

The Diablo (meaning “The Devil” in Spanish) is one of the most notorious pirate ships ever to roam the high seas. It is captained by the eccentric and flamboyant Molucco Wrathe, oldest brother in a clan of three famous pirate captains (his brothers are Barbarro and Porfirio).

In Demons of the Ocean The Diablo’s deputy captain, Cheng Li, rescues Connor and brings him back to the ship, where he rapidly proves himself a brave, talented and ambitious member of the crew.

The ship is always bustling with activity and the atmosphere is one of organized chaos. The members of the crew are a rowdy but generally good natured bunch – from Connor’s great friends Bart, Jez and Cutlass Cate through to “Toothless Jack” and “the Stinkbomb”. Meal times are rough and ready and there is a strong camaraderie aboard. However, the cheerful atmosphere belies an adventurous, battle-ready crew who are the terror of the oceans, looting and plundering all the ships that cross their path despite the precise rules and regulations laid down by the Pirate Federation.

There is not much time. It will be dark soon and the Feast will begin.” Vampirate Captain – The Nocturne 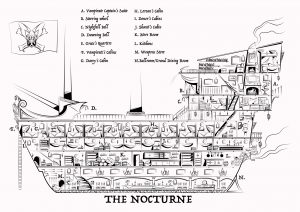 The Nocturne is the most mysterious of ships (we don’t even find out its name until the end of Tide of Terror) and is first glimpsed by Connor as he drifts in the sea awaiting rescue. “All he could make out was the dark silhouette of its strange, tattered sails. They seemed to flap gently as the ship made its way. It seemed as if, rather than sailing through the rough ocean, the ship was merely skimming the surface, unaffected by the strong currents.”

Connor glimpses the figurehead, with her sleek black bob and wide, mesmerizing eyes. Little does he know that the figurehead has a name – Darcy Flotsam, that she comes to life after sunset, or that she will become one of Grace’s great friends aboard the ship.

When Grace is pulled from the stormy seas by enigmatic Lorcan Furey, she awakes to find herself lying on red stained deck boards. Her range of vision is limited by a strange, circling mist. Before she can explore her new home, she is carried away and locked inside a cabin. The room is filled with ornate furniture and intriguing objects from the ship’s travels but Grace is more interested in what is going on outside. She is warned to keep her curtains closed and not venture outdoors for her own safety.

Hot food mysteriously arrives in the cabin without anyone seeming to enter the room. The candles flicker but never seem to burn down and time plays strange tricks on her. In many ways, the more time she spends aboard the ship, the less everything makes sense. But then Grace breaks free and starts roaming the ship’s corridors. And that’s when her adventures really begin…

I view The Nocturne a little like Doctor Who’s Tardis – it’s a key setting for the books and we see and learn more about it as the story unfolds. But, as Lorcan says to Grace, “there’s a million mysteries aboard this ship” and we’ve only just begun to scratch the surface of them.